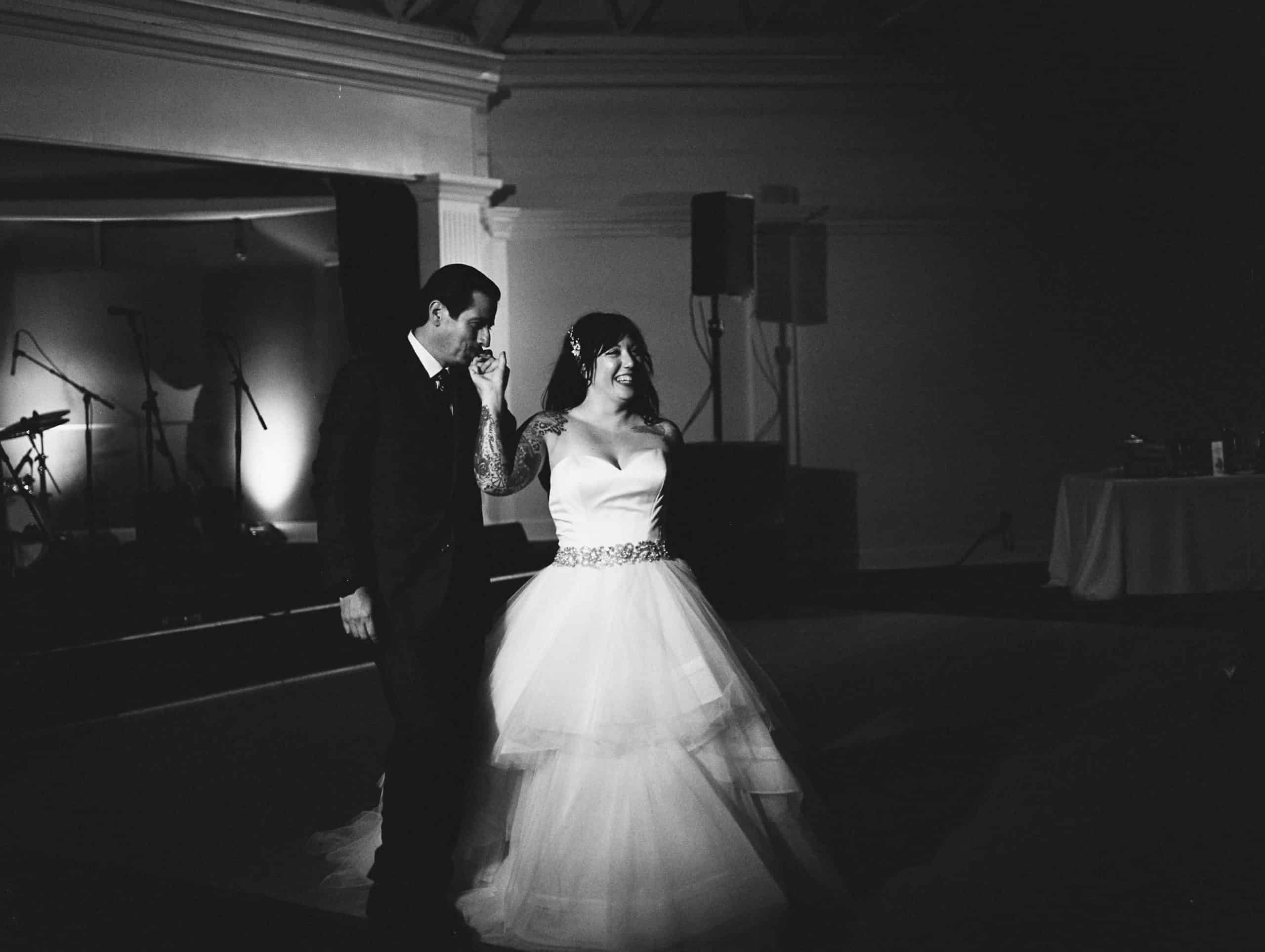 Why I shoot film

Ethereal colours, that oh so perfect grittiness of grain, all that soulful good stuff, we all know that film just looks amazing. I’m a film wedding photographer, and I love everything about it. There are still a lot of misconceptions and myths about using film to shoot weddings though. Bananas, as it’s a method that’s been trusted for centuries!

My first camera was a small point and shoot 110 film camera. This was 1981, and I was six years old. The camera I take to weddings is a similar age. It’s a Pentax my brother brought home one day when I was 16. I’ve been taking photos with that camera for THIRTY YEARS. I’m giving away my age but also blowing my mind that I still get so much use out of that camera. Lifting it to my face is so inspiring!

Safe to say, I’m a little bit in love with film photography. Ok, a lot. I am delighted to see more and more of my couples showing an interest in having their wedding photographed on analogue. Actually in 2022, all the weddings I photographed were entirely film!

How do you know so much about film photography?

I started my photography career using a film camera.  I was a photojournalist in London in the early 2000s, and I had no option but to do it all on analogue. Digital was not even a choice. In the cut-throat world of photojournalism, getting ‘the shot’ was a deal-breaker. If you didn’t get the photo, you didn’t work.

With the pressure on to get the shot, you also have a limited amount of exposures on your roll of film. Imagine knowing you have only 15 chances! Suddenly you’re in the moment, not a single other thought on your mind. This is what shooting film is like for me at weddings.

Although I have digital cameras and I do use them for backup, film is where I’m happiest. The ability to take an endless amount of photos is removed. Each image has to be thought about before pressing the shutter. Take the photo and move on, no second guessing and trying to perfect what is probably already perfect!

There is so much fun to be had in the darkroom too, the OG Photoshop. Most of my time at Central St Martin’s was spent in the darkroom and the library. Oh, yes, I learnt to develop my own film too! I’m not a control freak, honest, I just really like to know I’m the one in charge of what my film is doing.

Will we get less photos?

Although I take less photos, ironically there will be more ‘keepers’. There are a limited number of images on a roll of film. If what I see doesn’t excite me I won’t take a photo. The limitation of not being able to just mindlessly shoot a thousand images as with digital makes me so much more present in the moment.

You really want photos that have the following –

A display of emotion

Those are the images you will receive. All killer, zero filler.

But I do admit to a fondness for shoes.

How can you trust an old camera?

It’s a common misconception that digital is the ‘safe bet’. So much can go wrong! Batteries fail, memory cards fail, the camera fails and I’ve had issues in humidity and cold. I’ve never had a film camera fail on me. At a very hot Joshua Tree wedding, all the digital cameras turned off in the heat. I shot the rest of the day on a $40 compact film camera and the results are gorgeous.

My film cameras are like tanks. They are fully mechanical and can withstand a torrent of abuse. One of my cameras is the same one used by war photographer Don McCullin. His is on display in the Imperial War Museum, still working and complete with the damage from the bullet that was fired at him. This camera saved him from an AK-47.

Will our photos take ages to get back to us?

It takes me less than two weeks in the busy season to develop and scan my images. As there is minimal editing with film, I can get them to you so much faster. With digital, the editing time is much longer. Film already has the magic on the negative.

With film, there is an actual image made right there at your wedding. Light passes through the camera, hits the sensor and boom. An image is created. A tangible thing you can hold in your hand, in the form of a negative, created on an antique. The image below is from a camera made in 1959.

No. I hand develop all my film.

What happens if something goes wrong at the lab?

The chances of something going wrong at the lab is so minimal. In all my decades of shooting film, I have never had a problem with developing. Even the one-hour photo places back in the nineties delivered 10/10. I actually hand develop all my own film in the darkroom now. I use the best Kodak Brand Chemistry and Ilford for all my film processing. I’d trust the process more than a memory card, any day.

Film has an amazing dynamic range.  That’s huge in a situation where someone wearing a dark suit stands next to a person wearing a white dress. Two white dresses together? A nightmare in the harsh California sun on digital. With film, I can point my camera right into the sun and the highlights soften beautifully.

Film wedding photography was popular from the 1880s. It’s beautiful and timeless. This image is of my great, great grandparents. Brilliant, isn’t it? In my opinion film is beautiful and cannot be replaced. Each image is a tiny piece of art, carefully thought about and hand developed. My style is very much ‘home video from the 90s’, and film fits right in to that.

What does film mean to you?

Imagine 30, 40, 50 years from now. Sitting down with your future grandchildren and showing them your wedding photos on your phone?

Digging out a box of photos, or a beautifully made album?

I even photographed my own wedding, on film. I won’t post them publicly, but I will happily show you my wedding album if we meet in person.

With four decades of working with film under my belt, I felt it was time to share my knowledge. My course, the Analog Anarchist’s Guide to Film Photography, opens late fall 2022. You can find more information and the waitlist sign up HERE.

Please enjoy this gallery of film wedding photos. All taken with the following –

My favourite film stocks are – 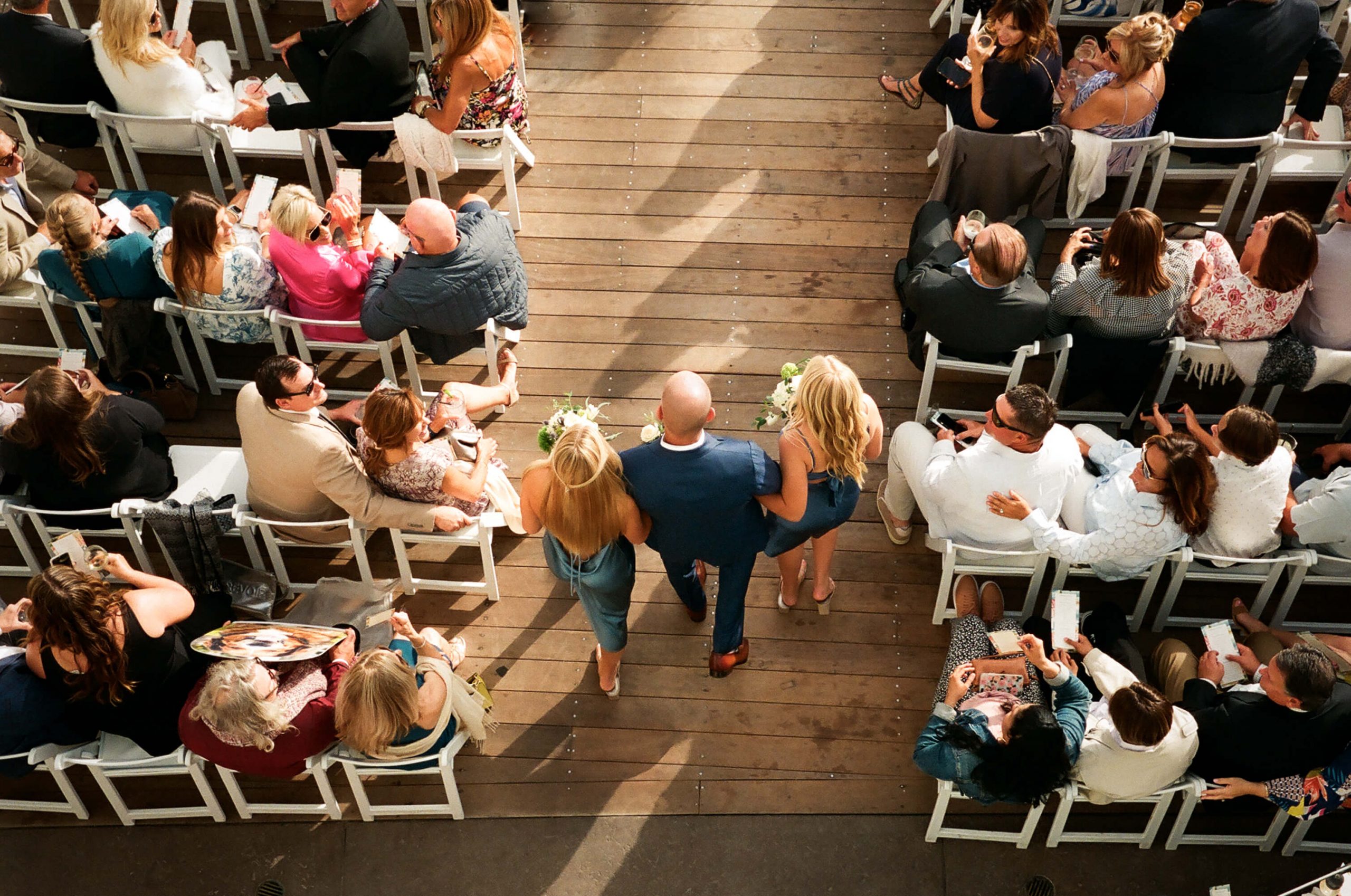 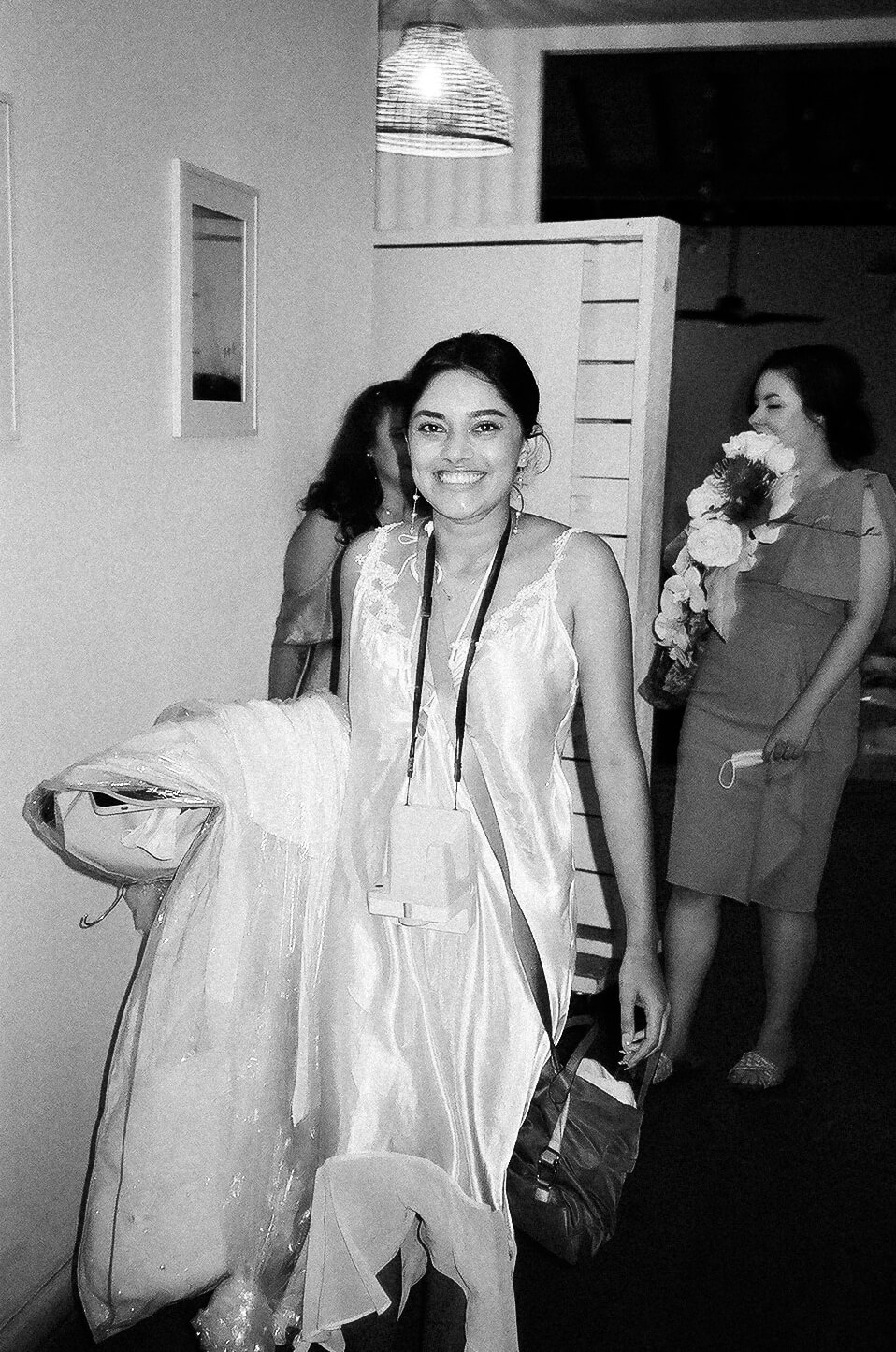 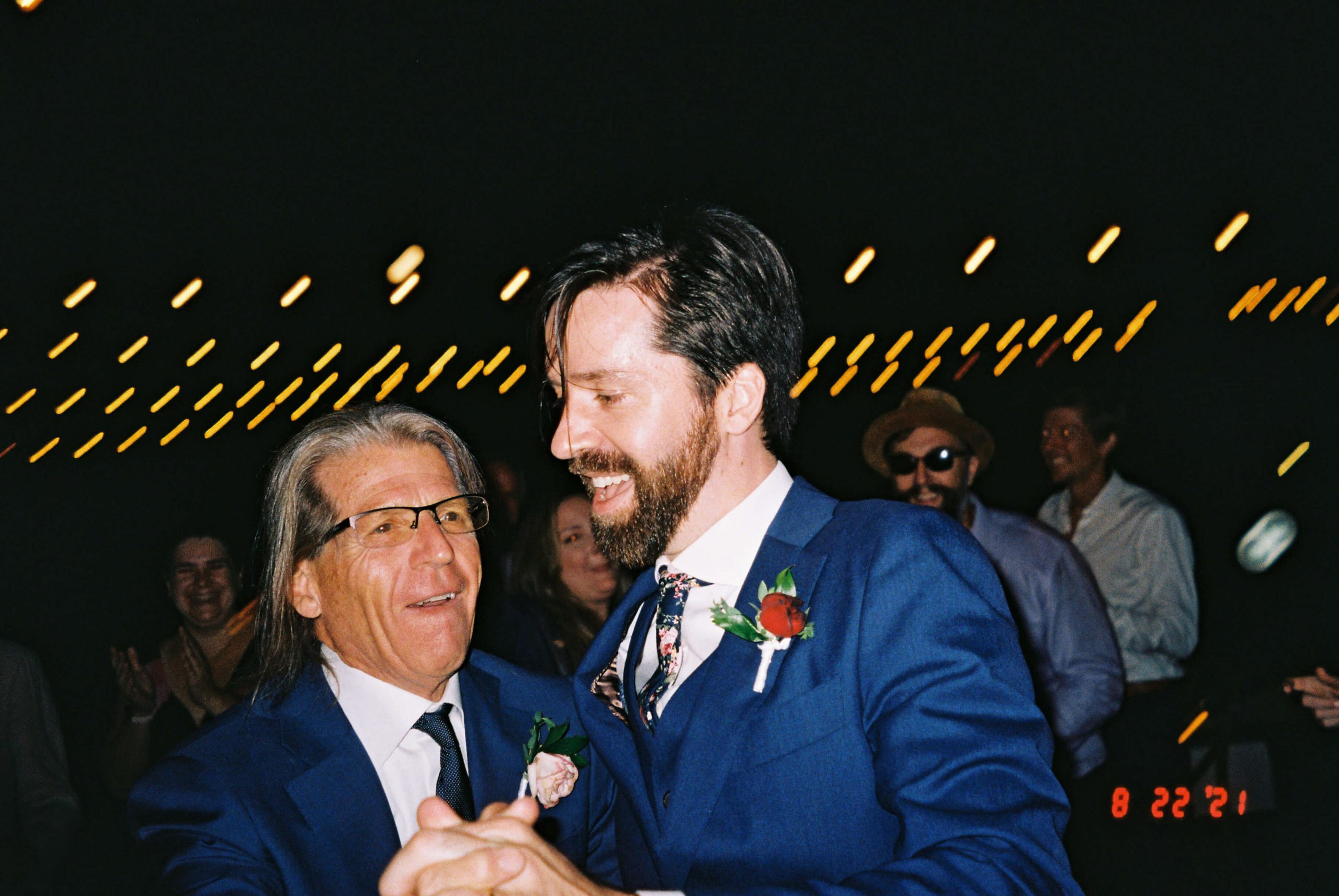 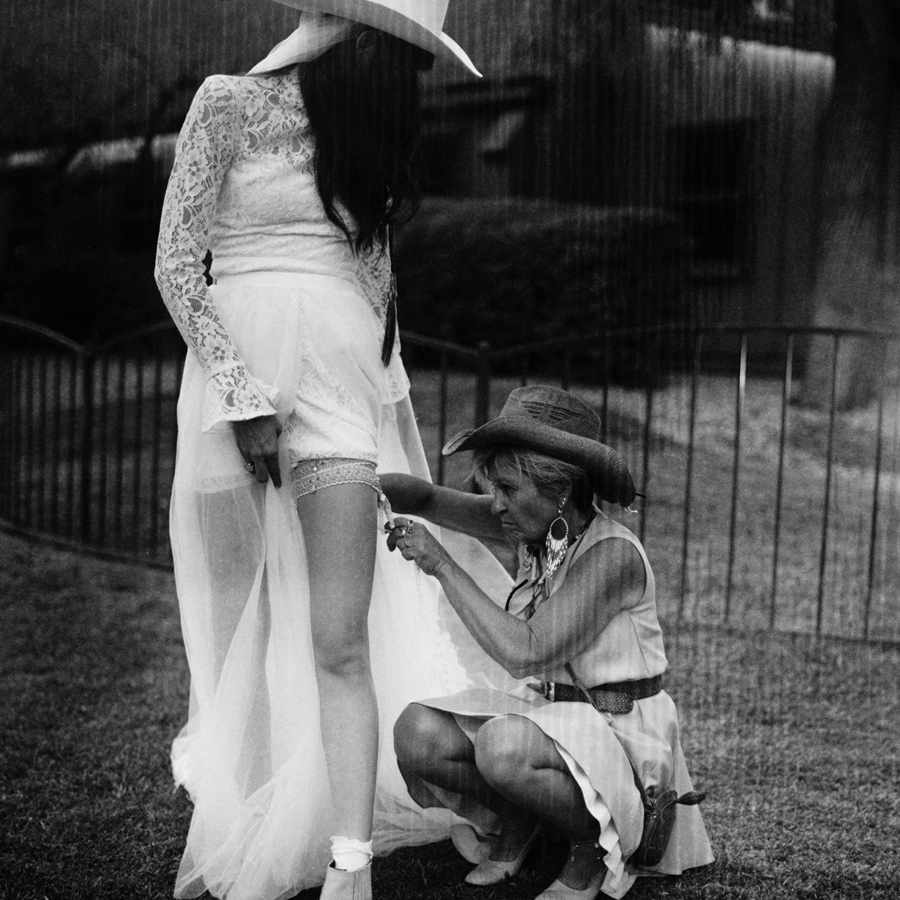 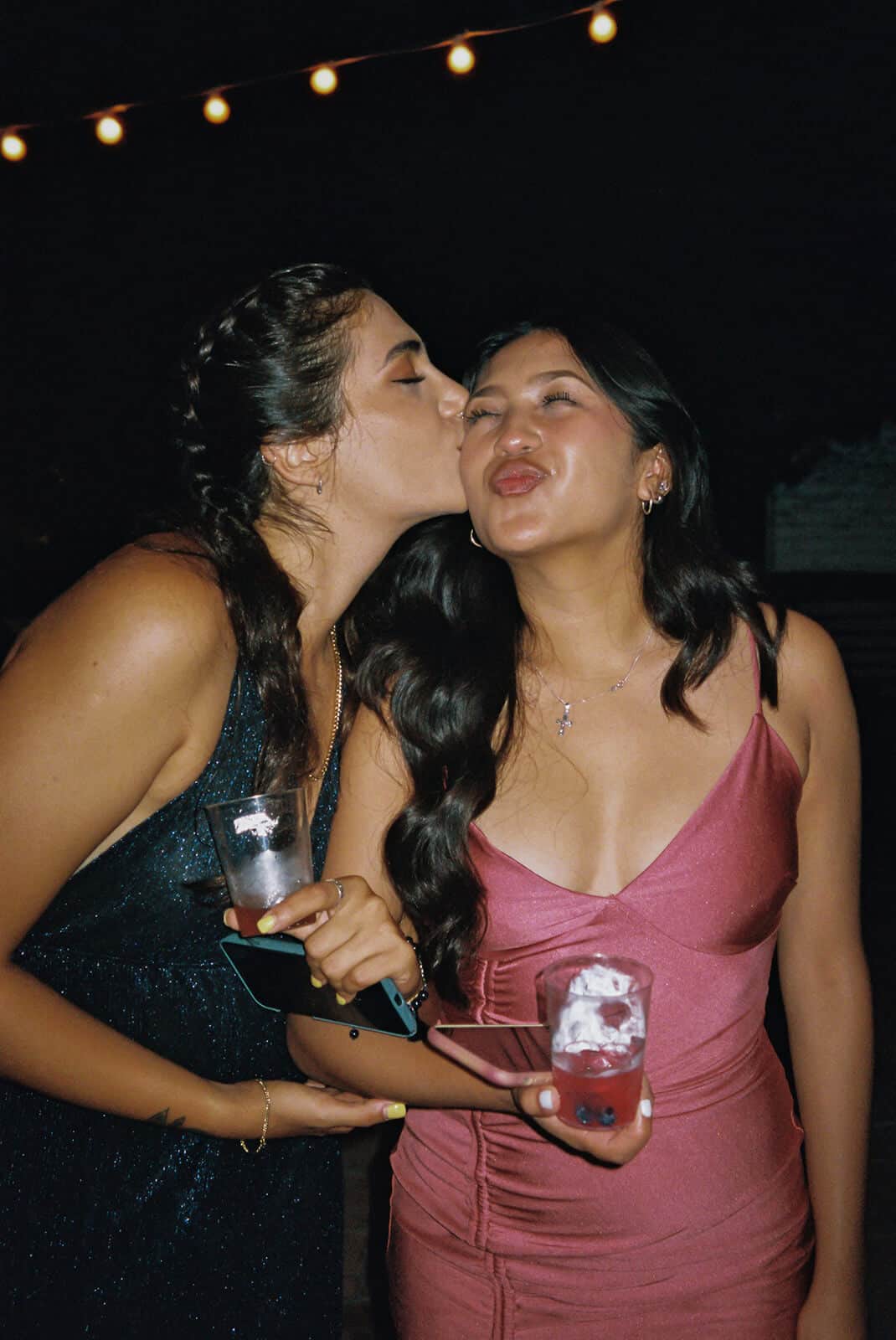 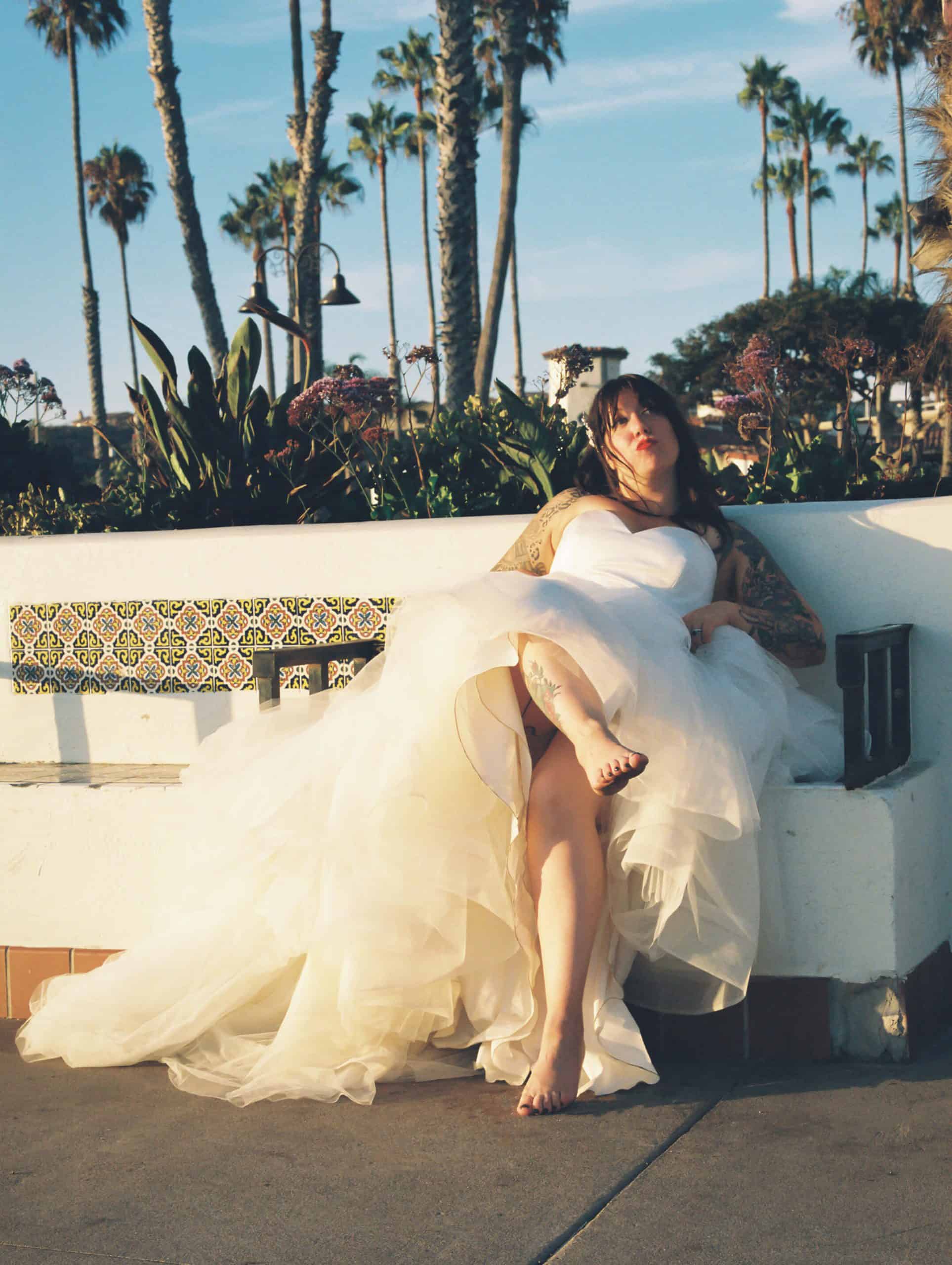 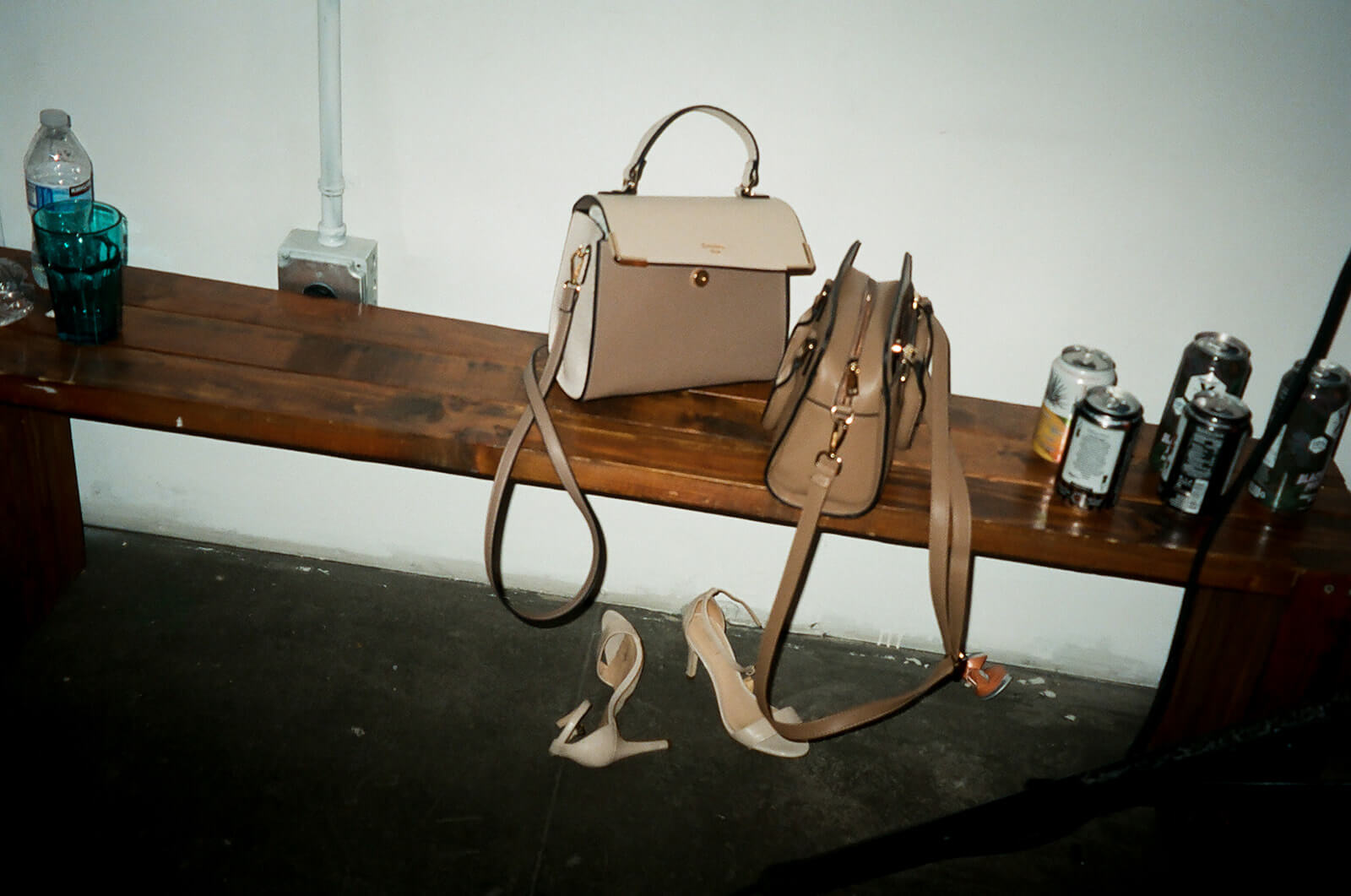 Feel free to get in touch with some info about your day, yourselves, your cats and all that jazz.

Send as much or as little as you'd like, but I really do love hearing all the details and cool touches you have planned.

Also, if you have a certain budget you would like to keep to, please do let me know.

I'm really looking forward to hearing from you :) 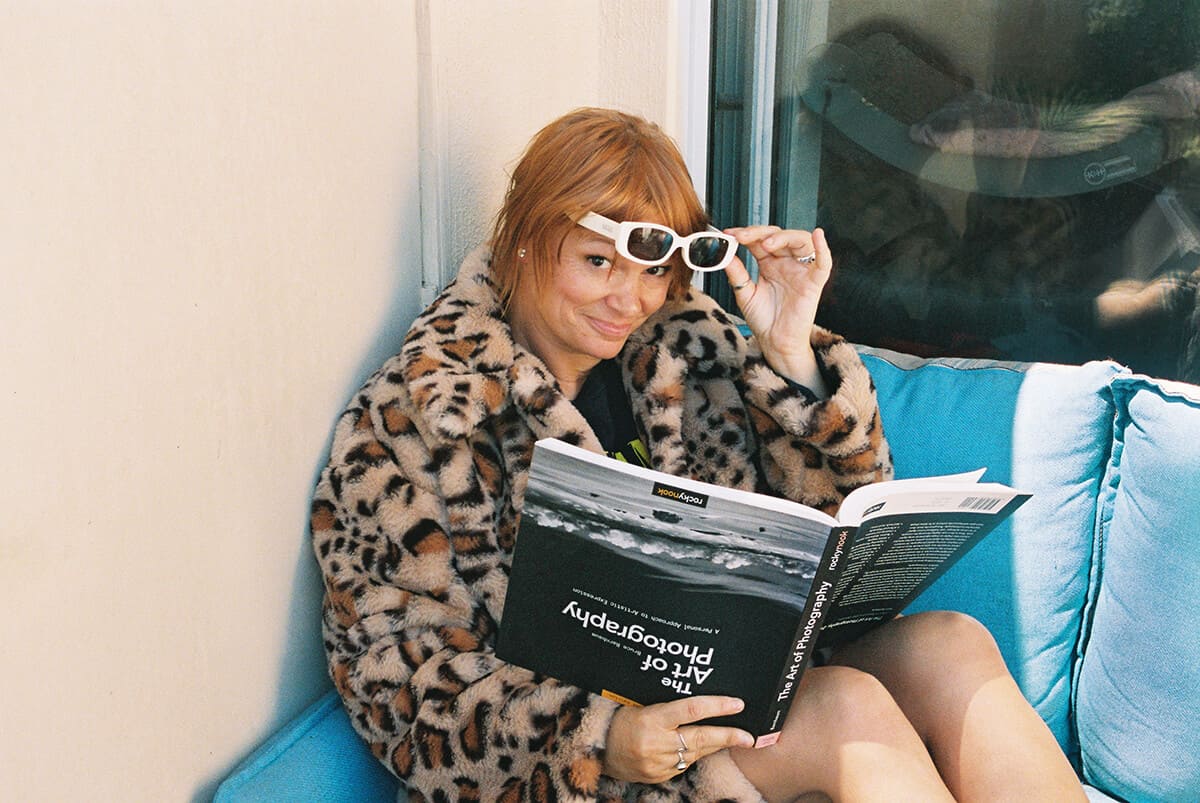 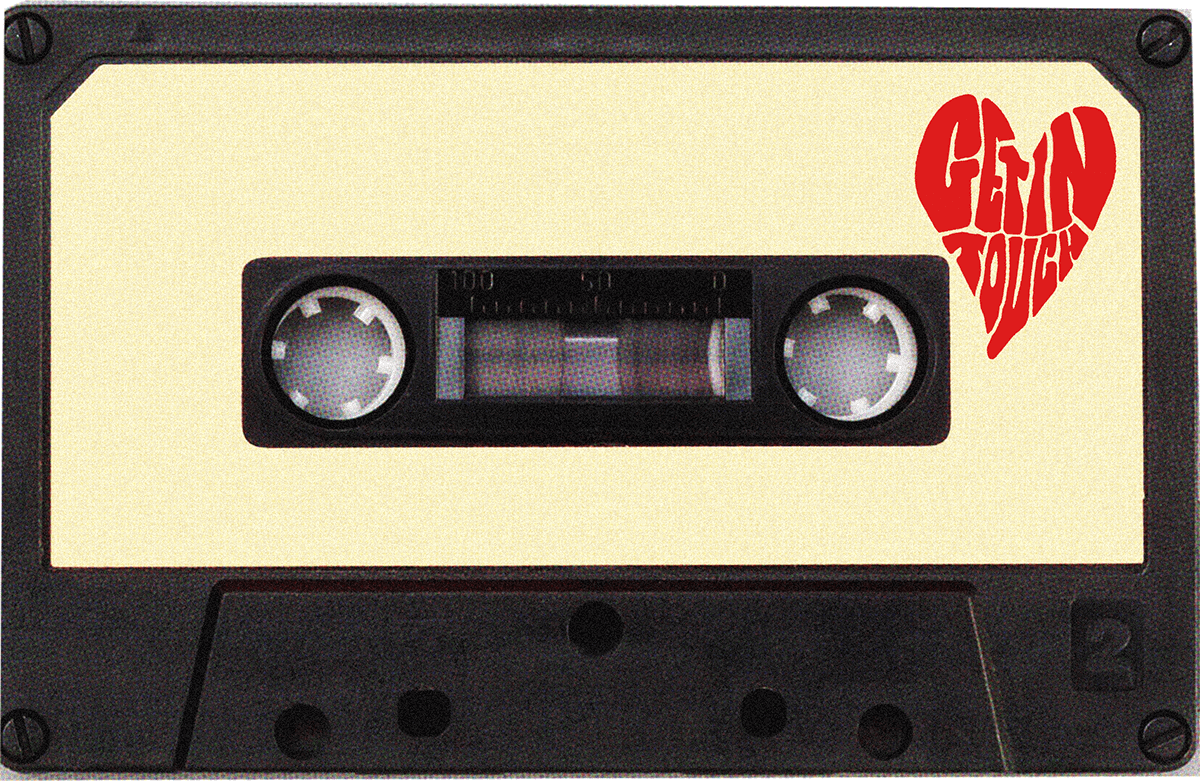 YEs!!! Love this! You are so on point with all of this! I’m So hAppy to be swItching Back oVer to what i fell iN love with about photography. There is just something so special about film. Wonderful read, BUnny!!

such a good read! love the inspiration and understanding of film that you share – so good!

I learned so much from this! I’ve debated trying my film cameras but they seem so daunting. Will definitely have to start with some lower stakes shoots. I can also definitely tell from these photos that you have a pj background too!

There really is something to be said about the beauty of film! The colors and vibe are seriously just unmatched.

How fun! I learned on film and actually had a Pentax for a long while. Did you ever have fun with a pin-hole camera?? Was part of my darkroom days – such fun and creative work. Love this and great info!

Yes! I love the pinhole camera 🙂 I’m going to make one next year! I shall keep you posted

Yes!!! I never wanted to switch from film To digital. If you can shoot a wedding/ elopement on film, anyone should Know your worth as a photographer. Picking up a digital camera does not make you a photographer.

I hated the switch from film to digital, and I’m just so happy to be back on film <3

I learned photography on film, and it’s so rare to find a film photographer nowadays! I love that you’re so passionate about it- and your work is gorgeous!

I’m inspired as heck to pick up my old film camera and bring it with me on my next client shoot. I used to shoot film early in my career and completely agree, there’s something nostalgic and so ethereal about images on film. Beautiful work and thank you for sharing your passion!

Do it! You’ll fall in love all over again, and your clients will be thrilled!

Such a great toPic to cover! I personally have only ever shot digital, but have been so curious about film and thr pros/cons. So awesome that you shoot exclusively with film!!

This was SO fun to read! I can totally understand the concerns that clients might have with shooting on film, but you address them with such professionalism and trust! I would totally trust you to shoot something for me on film only! 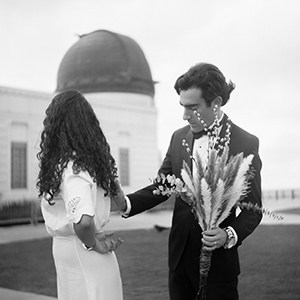 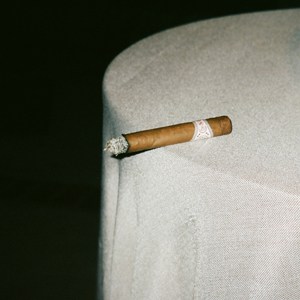 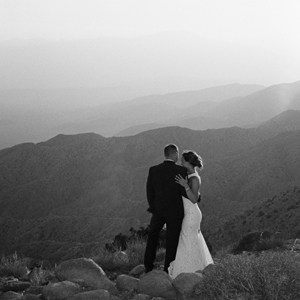 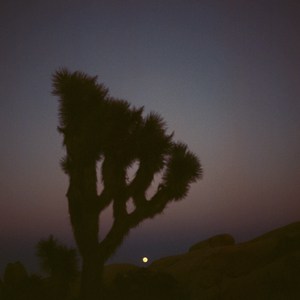 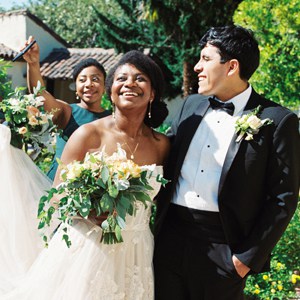 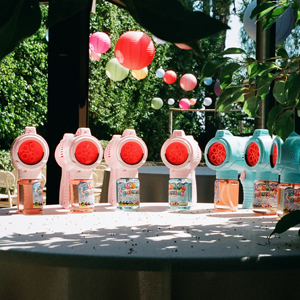